I thought I had learned all there was to rescuing seemingly helpless animals from my friend Heather.

That adventure started when I coaxed her into her first yard sale adventure ever. While hunting for the next big find (as she was now hooked – like me –  after being skeptical about buying other people’s stuff) in a semi-rural community north of Seattle, we came upon a “poor little lamb baby” outside of the fence from the rest of its apparent family.

“Poor thing!”  Heather had warned me once that she had been banned from watching animal movies as a child as even the hint of an animal in distress sent her into hours of tears … so I should have guessed what was coming.

“We have to rescue it.  It’s cruel to leave it out here … what if it wanders into the road and gets hit?”

Certain that we doing a great service, we boldly knocked on the door only to be greeted by a grumpy farmer.

“Happens all the time.  When it gets hungry, it’ll find a way to get back in.”

The door closed and we sluffed back to the car … lesson in tow.

The lesson I carried from that day?

Fast forward a decade, and I find myself with yesterday’s dilemma.

Mike and  I felt stir crazy in the blaze of some unanticipated November sunshine.

We live a mile from the Idaho state line.  But as little as the effort was, we decided that driving over the state line would be a big adventure so we headed out.

South on Highway 95 we had the first phase of our day’s dilemma.  Should we turn east through Potlatch and explore the backroads and tiny towns that would bring us the bottom of Coeur d’ Alene Lake?  Or should we go west through McCroskey State park and then home? 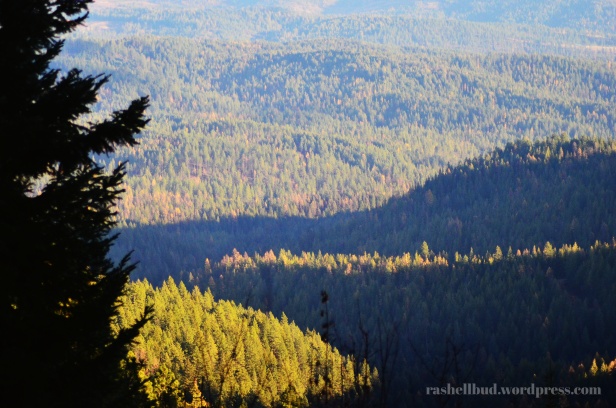 An imaginary coin flew into the air and somehow Mike determined that it was “heads” and “east”.

He had never been this far south in the park … it had been my backyard growing up as both my parents loved this drive.

I had my camera readied on my lap for action should we happen on any of the wild life that others often reported up here.  Wolves, deer, elk, moose, owls … if you were in the right place at the right time …

Three miles uphill into the thickest and most remote of the park with few access trails or picnic spots, something moved on the road as we rounded a corner.

Two dogs were standing at the edge of the narrow and steep road.  Well … one was laying (a fluffy, old looking Golden with tired eyes).  Next to it danced a Border Collie mix. 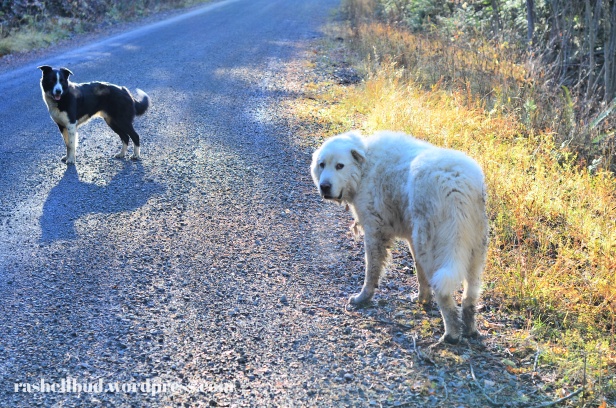 “This is an odd place for dogs.”

“Do you think they’re lost?”

“I don’t know … they probably wandered up from one of the farms or are with someone who is hiking.”

“Well … there are no trails around here … and we haven’t seen any cars or signs of people.”

“I know … and this is sure a long way to wander from a farm.  We’re three miles from the last house at the entrance.”

We kept driving as we talked.  A glance to the review mirrors showed the Collie out on the road staring after us and bouncing as if it had expected us to stop.

“Do you think they were abandoned?”

We rounded a corner, still deliberating … a little haunted by the Collie’s stare and the thought they might have been abandoned.

Visions of the grumpy sheep farmer found its way out of my memory banks and sat in that “You’re-over-reacting-trying-to-fix-everything” corner of my brain, right next to “guilt” and the promise to “not meddle.”

“Let’s go back.”  Forget grumpy farmers. Forget all the things – like Mom’s battle with dementia, worry about my kids (even though they’re both doing fine!) –  things that I can’t rescue or do anything about. Forget the possibility of being scolded for meddling.

At least we could investigate.

Backing down the narrow gravel road with a harrowing drop off to our left was little daunting, but we found a widened spot at the very corner were the dogs came back into view.

The Collie moved first, dancing and growling at us, hackles up.

He was a neurotic dog … wiggling with delight that we were there … running back to the Golden … nipping at its ears … trying to keep it moving, it seemed. Yipping, growling, tail wagging. He responded to Mike’s soothing tones and the hackles evaporated.

The Golden pranced in place, more exhausted than hesitant.  We finally got hold of his collar and found a rabies tag with the the vet’s number on it.

Amazingly … we had cell service up on that mountain side in the middle of the trees.  AND amazingly … someone answered the phone at the small town vet clinic on a Saturday afternoon.

It took a few calls  and a lot of shivering as we stood on that shade covered mountainside in 30 degree weather, but we were finally had the owner on the phone.

“Yes, he’s missing.  Thanks so much … There’s another dog?  A Collie you say?  That’s our neighbor’s dog … he convinces ours to wander, but that is really far.  And it’s hunting season so we try to keep them home.”

We offered to load the vagabonds into our SUV and meet the man at the park’s entrance but … “Oh no! You don’t need to do that,” he insisted.  “They reek … pretty bad.”

That was true.  We had noticed the dirty dog stench from the get go.

We agreed to wait with our new, four-legged friends until the owner could get there.

Mike loves dogs and would love to have one, but its not in the cards at the moments.  In the stead it seems like God blesses him with dog moments where ever we go.  So here we are … in the mountains with a half hour of throwing sticks and playing fetch with a very happy dog.

That was the Collie.  The Golden lay on the edge of the road, lethargic and obviously a little put out with the Collie for dragging him into the adventure. “He’s lazy,” his owner had said on the phone, but the brambles in their fur and some blood on the Collie hinted at a story that we humans will probably never know about. 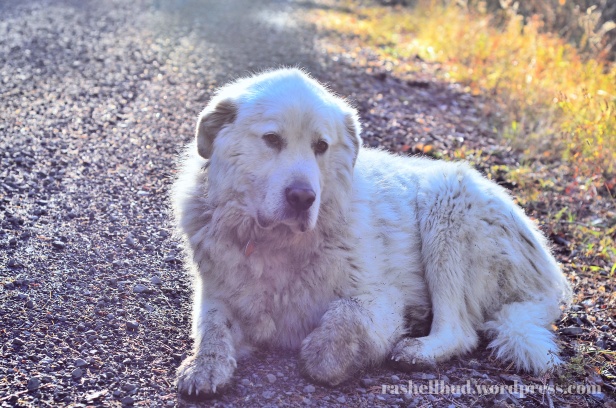 All ended well, and the dogs got a cushy ride home in the back of a pick up … were saved from a frigid night in the woods … were free from the risk of wolves and hunters.

Today, I needed to meddle … to see that our meddling had a good result.  Caring is good, even if sometimes, caring is all that we humanly can do … sometimes we can help (like today) … sometimes God asks only that we care while He does things we can’t see.

Thanks for stopping by to read.  Your “likes,” “comments,” and “follows” help me to grow my readership and community.  Thanks for using links and giving credit when you share. I appreciate you and am thrilled to have you along!

Are you a subscriber?  It’s free and is a great way to not miss any posts.  Click the follow button to sign up and receive email notifications.  Thank you!!

Note: I use a free blogging site, so the advertisements are part of the territory.  I don’t see the ads you do, so just know that they are not necessarily things I endorse.  =]

ABOUT THE PHOTOS ON MY SITE:  PHOTOS AND GRAPHICS ON RASHELLBUD, UNLESS NOTED, WERE CREATED BY ME AND ARE PROPERTY OF RASHELLBUD.

6 thoughts on “To The Rescue”

This site uses Akismet to reduce spam. Learn how your comment data is processed.

Sometimes You Just Need to See a Bird Taking a Bath